INC4 & NEAR – A Solid Development Partnership 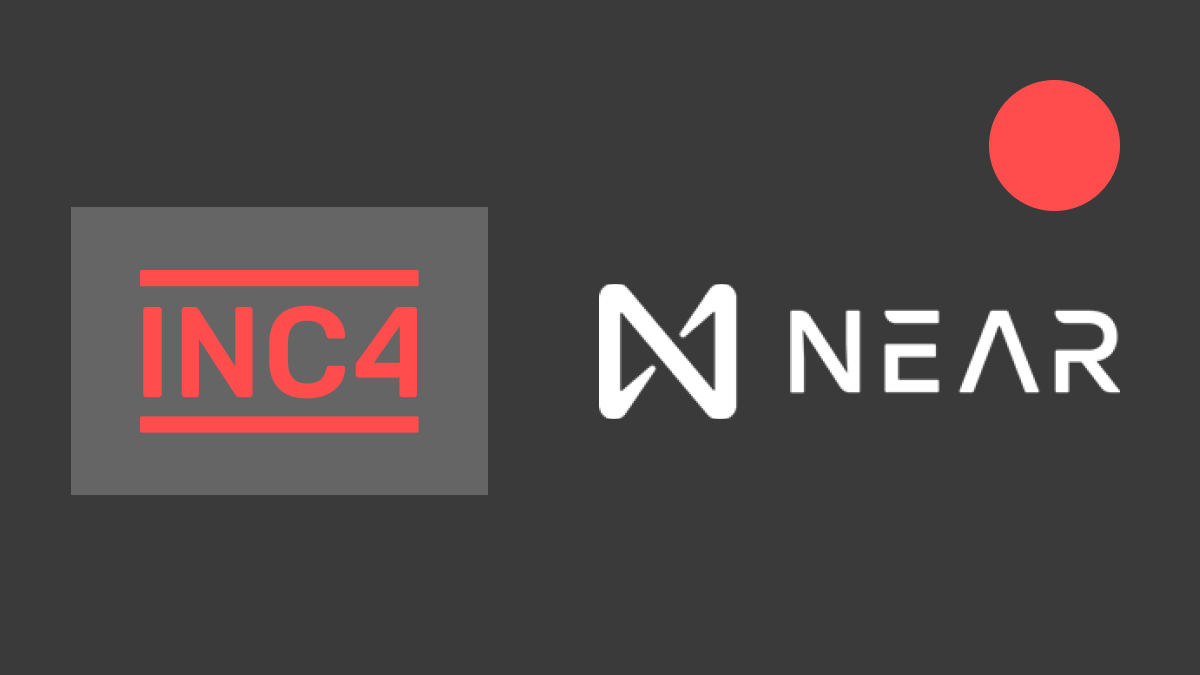 Since the beginning of 2021, NEAR Protocol has gained over 200 ecosystem partners and integrated with over 100 community guilds. We are excited to be joining the nearcon.org conference, where NEAR’s core team members will share valuable insights, celebrate the first anniversary since the mainnet launch, and let attendees know about exciting upcoming prospects.

Regardless of ups and downs in the crypto market, 2021 has seen huge advancements in the blockchain development sector, one of the most significant being the investment put into different layer 1 blockchain protocols.

Joining those blockchains is NEAR Protocol, which brings benefits to both developers and crypto users through an emphasis on user-friendly interfaces and a supportive, enthusiastic community — which we are a part of!

In advance of NEARCON (Oct 26 – Oct 27), celebrating the protocol’s 1 year anniversary of being on the mainnet, we wanted to talk about INC4’s partnership as the first custom development guild servicing the NEAR ecosystem. It is a testament to the confidence in NEAR Protocol that the ecosystem has grown so rapidly in such a short space of time, with many other guilds coming on board to help create DeFi applications, NFT projects, DAOs, and more.

Our business team sat down with Alina Tustanovska, Chief Operating Officer at INC4, to talk in more detail about how the NEAR partnership began and why it’s such a mutually beneficial relationship.

Tell us about the partnership – how did it come about?

We were actually introduced to the founders through a mutual friend. We wanted to chat with them for a long time, as they are doing really great work, and then they reached out for INC4 services. They needed a knowledgeable blockchain development company to help build the Open Forest Protocol (OFP), an ambitious global project that brings transparency and monitoring to forestation efforts, on the NEAR blockchain.

We were excited to take on this challenge as we knew it would be a huge step forward for the ecosystem, demonstrating NEAR’s ability to effectively and securely run such an important project on its blockchain. It would be a great use case for developing trust in the blockchain community, and allow NEAR to be seen as a serious competitor to Ethereum.

The team at NEAR saw the great work we were doing and invited us to help grow their ecosystem by becoming part of their Guild Program. Our relationship has only grown closer as we ready OFP for release in the very near future.

Like its layer 1 blockchain competitors, NEAR offers a scalable solution with fast and cheap transactions. What is different about the protocol?

You’re correct — like its competitors, one of the big drawcards is the cheapness of transactions. NEAR uses a Proof of Stake for consensus and can scale easily through its sharding mechanism, called Nightshade. Due to this, the blockchain can process around 100,000 transactions per second, without the large fees associated with Ethereum at peak times.

One large point of difference when comparing with similar blockchains is that it is built for normal people to use. The team does a lot of work to make sure that all developers are supported, regardless of how much experience they have. For users, NEAR is accessible and user-friendly, even for people who don’t have so much experience in cryptocurrencies. This is exemplified with the wallet which is connected to the protocol. There is no need to connect a third-party wallet like Metamask, as is the case with Ethereum. It can be created in two clicks through a user-friendly interface. INC4 is currently working with NEAR to release an application where users can purchase goods with cryptocurrency. Integrated with the NEAR wallet, direct payments with the NEAR cryptocurrency are enabled within the application.

Other notable differences are that NEAR does not use the Solidity programming language (which is the most common for building on Ethereum compatible blockchains) and has a unique consensus mechanism called Doomslug. It is also a carbon-neutral blockchain, as awarded by the climate sustainability organization South Pole.

What benefits does being in a NEAR guild bring you?

As we have now established ourselves as a capable team that is able to develop decentralized applications on the Near blockchain, we have become embedded in the community.

This brings a few advantages:

We also get to work on cool projects. There is a pizza place in Lisbon that wants to build a mobile application on the NEAR blockchain, where users can pay for the pizzas using cryptocurrencies. We’ve been working on this for two months and it’s almost finished. It’s a unique project and one we’re really happy with.

Are you working with any other blockchain projects?

Yes, we know a lot of people in the blockchain sphere and take on projects from far and wide, but NEAR is our deepest partnership so far. While other protocols trade on hype and start to fade after a couple of years, NEAR is always pushing to develop something new, and they have built a really dedicated community. They seriously want to be a competitor to Ethereum and have made a lot of inroads, by developing bridges from Ethereum; applications that want to take advantage of a faster, cheaper, and secure blockchain can move their architecture onto NEAR in the easiest possible way.

In your work with INC4, do you offer NEAR as the preferred option for building blockchain projects?

Every project has its own requirements; a blockchain for one project may not necessarily fit another, so the “preferred” blockchain is decided on a case-by-case basis. When we have a new client, we conduct a thorough analysis of what is required, and then provide a few different options, talking them over with the client. What we can say is that now that we are experts in building on the NEAR protocol, we are able to confidently provide it as an option where appropriate, and if it’s chosen, build a great application often in a quicker time than expected.

Final question: Do you have a message for those who are coming to NEARCON?

Simply come and get acquainted, we have eight team members who are involved in NEAR-based projects and we’d love to meet you. By reaching out, we’ll be able to do great things together. NEAR provides fantastic infrastructure, while INC4 knows how to develop robust applications. It’s as good a partnership as you can get.

If you have a great idea for a DeFi application or NFT project, talk to the specialists at INC4. We do everything from development to consulting and smart contract audits, all with the highest level of professionalism.