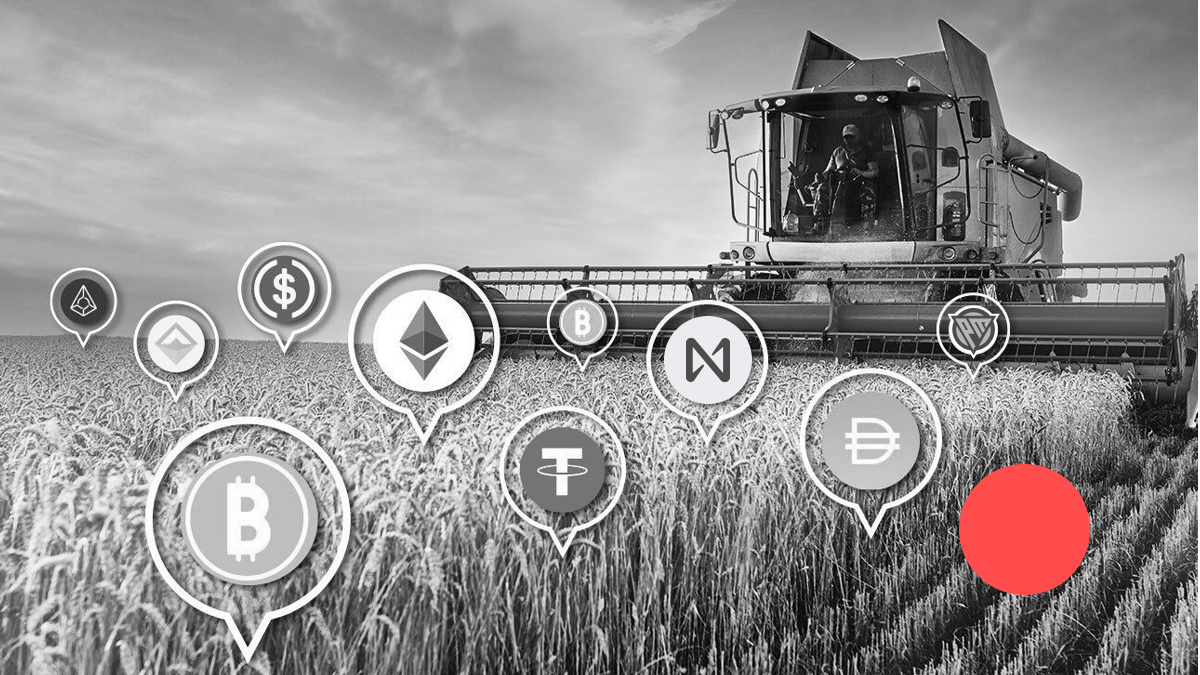 According to DeFi Llama, there is currently over US$216 billion invested in the DeFi sector. One of the key mechanisms that has been used so far to garner protocol investment is yield farming, which skyrocketed in popularity around mid-2020. With large risks but large rewards, yield farming has been a gift to those in the right place at the right time; but for projects themselves, getting investment through yield farming is not often conducive to long-term stability.

Simply put, DeFi yield farming involves lending your cryptocurrency to the most profitable platforms to earn the highest yields. The Automated Market Maker (AMM) model that most DeFi applications deploy requires liquidity, which is in part provided by users in exchange for a return on their investment. Yield farming is often compared to gaining interest from a bank deposit, but there are a few key differences, including:

This mobility is aided by the fact that you can enter a farming pool manually, but there are also many auto-farming tools out there that automatically invest, devest, and re-invest according to the most profitable returns of the day.

To better understand crypto farming, we can look at the example of Compound Finance. Although not the first, the project is widely acknowledged as having popularized yield farming. They did this through the issuance of the COMP governance token alongside its normal percentage returns for investors, setting a model for other DeFi projects looking to attract crypto holders.

Yield farming allows users to earn much higher rewards than they would for simply holding their cryptocurrencies. They can also benefit from extra incentives for being loyal to the platform, with giveaways such as token airdrops if they happen to be holding the project’s governance coin at the right time. Lastly, there is an exciting, gamified element to yield farming, whereby rewards can easily multiply with the skyrocketing of a particular coin.

For protocols, more liquid funds mean more money can be lent, with associated fees helping benefit the protocol’s creators and reinvest in the development of the ecosystem. In addition, for those that issue governance tokens, a greater number of yield farmers results in a more decentralized project, as coins are more widely distributed. All this activity helps make a project popular, often with a positive effect on the price of the project’s native token, meaning more people are likely to stay invested, creating a positive feedback loop.

As mentioned in the introduction, while it can bring huge rewards, there are also some yield farming risks to consider, both for individuals and the DeFi protocols themselves.

This rebalancing can leave you holding more of one coin and less of the other, bringing a possible loss compared to if you just held the coins without investing in any liquidity pool. Of course, impermanent loss isn’t a given, and even if you suffer from impermanent loss, this can be made up for by the percentage return offered by the DeFi yield protocol you put your funds into.

If the concept of impermanent loss is difficult for you to get your head around, check out Binance Academy’s explanation, complete with a straightforward example.

As we showed in our recent blog post on DeFi 2.0, 42% of yield farmers exit their positions within just 24 hours! This is exactly the problem that this second iteration of DeFi projects is trying to solve, through slow-release bonds and protocol-owned liquidity.

Despite these risks, conducting some research can give you an idea of which projects are trusted, and which ones are best avoided. Within a project, there are also varying levels of risk tied to different pools; for example, providing USDT will always be a much safer option than farming a low-volume, highly speculative cryptocurrency.

Now that you have a strong foundational understanding of yield farming, it’s time to delve into the world of leveraged yield farming, which offers greater returns through user-friendly Dapps.

What is leveraged yield farming?

Once you have an understanding of yield farming, leveraged yield farming is easy to grasp; it is simply the practice of borrowing external liquidity to farm a larger amount of crypto. This means users have the option to increase their returns by a sizeable amount.

A word that is usually mentioned in association with leveraged yield farming is capital efficiency, or getting the best bang for your buck. Many DeFi lending platforms require users to overcollateralize. In practice this would mean borrowing $1,500 worth of DAI by putting up $3,000 worth of Ethereum, for example. This is prohibitive for some users but also leaves funds dormant when they could be used for further investment in the DeFi ecosystem.

Here we must mention that borrowing fees of 10-25% are common (depending on the pool and amount of leverage). The high fees are due to the risk associated with the loan and are taken out of the yield farmer’s returns. Some of this fee is paid to the lender themselves, and some goes to the platform.

It also goes without saying that the risks associated with yield farming that we mentioned above also relate to leveraged yield farming, although with borrowed funds, the issue of liquidation is a greater threat. As we see in leveraged yield farming projects such as Alpaca Finance and Alpha Homora, bots monitor positions, closing them, repaying the farmer’s debt, and taking a fee if one of the tokens in the position drops by an amount that would put at risk the farmer’s ability to pay back the loan.

As we can clearly see in the table below, the more a user borrows, the less a coin has to fall to trigger liquidation.

Despite the considerations associated with leveraged yield farming, picking a solid project and investing in coins you believe are backed by worthwhile projects can bring fantastic returns, which is precisely why the projects we will look at in the next section have accrued so much locked funds.

While leveraged yield farming projects are still in their infancy, we will take a look at three projects that have already gained significant users.

At the time of writing, Alpaca Finance has a TVL of US$789 million, and is one of the biggest projects on BSC. Lenders and borrowers are incentivized by the high APYs and ALPACA token, which aside from its valuation, is worth holding on to as it confers governance rights. There is also the auto-farming stablecoin AUSD, which is overcollateralized by a different crypto assets. Currently there are 58 farming pools, offering 2-3x leverage.

Alpha Homora, with a TVL of US$827 million, claims to be the place that provides the highest APY for lending ETH on the market. It is also sets itself apart from most competitors in that it allows users to provide liquidity or farm with just one asset.

V1 was deployed on Ethereum and BSC, while Alpha Homora V2 has been deployed on Ethereum and Avalanche, meaning users can always interact with the app without having to navigate the prohibitive gas fees of Ethereum. This seems to be a winning strategy, as although there are more farming pools on Alpha’s Ethereum V2, the TVL is just US$300M, compared to the US$600M locked in Alpha’s V2 running on Avalanche.

Despite getting less exposure than Alpaca Finance and Alpha Homora, Apricot Finance launched just before November on Solana, and currently boasts a TVL of just under US$150M. As with the above projects, participants have the option to lend and farm with leverage of 1.25-3x depending on the pool.

As a point of difference, users can benefit from Apricot Assist if their position is in danger of liquidation. As we saw above, the more coins are leveraged, the less movement can be accommodated before a position is liquidated; however, with Apricot Finance, users can set certain parameters that de-leverage positions, allowing users to keep their profits and continue farming, albeit with a smaller return.

PembRock Finance is the first leveraged yield farming project on the NEAR blockchain, headed by INC4’s Founder and CEO, Igor Stadnyk! After a successful early investor sale and integration with the DEX Ref Finance, PembRock is nearing a launch that will allow users to get sky-high yields on NEAR’s user-friendly blockchain.

PembRock was built for a few reasons:

NEAR is a great blockchain to build on, not only because it is fast, secure, and cheap, but also because of the guilds — teams of developers that help bring projects to life through development support. This atmosphere of teamwork allows for quicker and better development, which is why the NEAR blockchain is rapidly expanding its ecosystem of Dapps and gaining significant investment.

How does PembRock Finance work?

On launch, two base assets — NEAR and USDT — will be supported, with leveraged farming integrated with Ref Finance. After launch, the number of pools will be expanded, benefiting both lenders and farmers.

To find out more about features and the $PEM token, go to PembRock Finance’s website or Medium channel.

The leveraged yield farming sector is relatively new and still has lots of room to grow. This is clear when looking at the TVL of the above-mentioned projects in contrast with established DeFi protocols such as Pancake Swap, Aave, and Curve Finance.

Another key difference between yield farming and its leveraged counterpart also comes up when we consider where the concentration of funds lie. Most of the large yield farming projects are built on Ethereum, and this is consequently where the money is; however, new generation projects are not necessarily prioritizing this blockchain. With the increasing ease of transferring funds to different blockchains, as well as EVM-compatibility, projects can launch on BSC, Solana, and Avalanche, either exclusively, or along with Ethereum, without worrying that they are limiting themselves. It is an extremely significant development that users are using the Avalanche blockchain to interact with Alpha Homora more than they are Ethereum.

Yield farming as part of DeFi 2.0

A recent article in CoinDesk argues that liquidity mining in its current form is no longer fit for purpose. The people Andre Cronje describes as liquidity locusts have consequences for the stability and governance of a project. While this was accepted as part of the ongoing experimentation with DeFi, now we are entering a phase where products are maturing and gaining wider usership, meaning relying on long-term stable interaction is more important than ever for the longevity and trustworthiness of a project.

DeFi 2.0, characterized by its protocol-owned liquidity, looks promising in its attempts to at least put the control of funds in the hands of the projects themselves, but there is still the problem of attracting large and sustainable amounts of capital. Bonds, governance incentives, and token lockups are one way to stave off project desertion, but as we have seen with the recent large drop in the price of Olympus DAO’s token, OHM, we are still a while off being able to control large sell-offs and subsequent liquidations.

Despite the challenges mentioned above, crypto yield farming still has a large place in the landscape of DeFi 2.0 and Web 3.0, encouraging the efficient use of capital in what is a fast-growing ecosystem. Worthwhile projects can bring investment to innovative projects and blockchains while handsomely rewarding users, so it’s no surprise leveraged yield farming projects have made a strong start in 2022. Watch this space!
If you want to work with a trusted and experienced team for your DeFi or NFT project, reach out to INC4 today!