The Rapid Growth of NEAR in DeFi 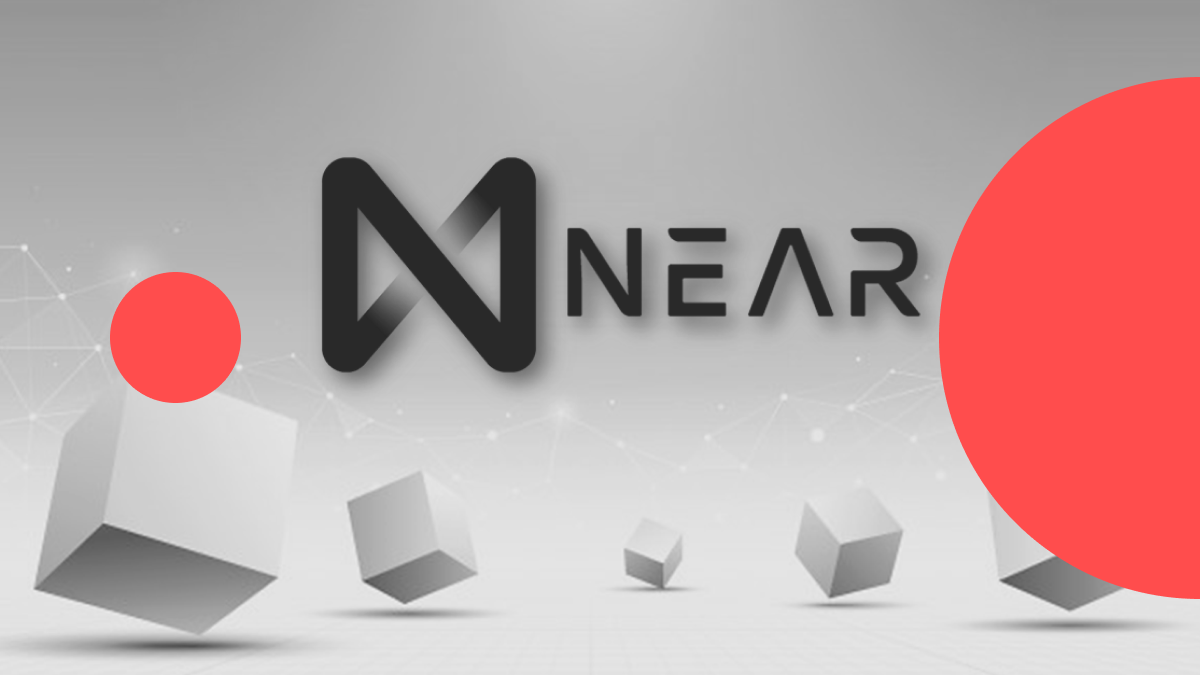 Despite recent market turbulence owing to inflation fears, the war in Ukraine, and a slowdown in the growth of tech stocks, decentralized finance (DeFi) numbers still reflect positive market sentiment. While down 16% from a high in December 2021, the amount of funds locked in DeFi projects is up markedly compared to just one year ago.

With so much investment in the sector, development is happening at an extremely fast pace, both on the blockchain and project level. As we wrote about at the end of 2021, new layer one protocols are providing extremely fast and cheap transactions while remaining decentralized and scalable. What’s more, through blockchain architecture that incorporates EVM compatibility and bridges, these layer one solutions are becoming more interoperable by the day, providing a solid foundation for Web 3.

A blockchain that has shot into prominence over the last year is NEAR Protocol. Launched in early 2020, the NEAR blockchain continues to develop and build out its ecosystem with the help of guilds (which we will explore below) and a foundation that has given out grants worth more than $1.2 billion! This approach seems to be working as the blockchain is currently home to 230+ Dapps — DEXes, lending, yield farming, gaming, ReFi, NFTs, the Metaverse, and more have all found a place on NEAR, and are either already operational or coming very soon.

In this blog post, we will give an overview of NEAR, look at some of its main features, and examine three top projects that are part of the ecosystem, one of which is being supported by our expert team here at INC4.

NEAR is a Proof of Stake blockchain built for hosting decentralized applications. The goal, as stated in the protocol’s white paper, is to:

Positioning itself as one of the key building blocks of Web 3, NEAR is committed to creating an infrastructure than can be used by anybody to create truly decentralized applications that push boundaries while, unlike the data hungry permissioned apps we currently enjoy, keep the users interests at heart.

This commitment to the people using the Dapps created on NEAR’s decentralized application platform is extremely important in spreading DeFi beyond the early adopters and into the mainstream. For this reason, NEAR wallets have account names that are human-readable, rather than a string of letters and numbers, and those who are looking to explore can interact with Dapps without having to connect a wallet straight away.

Another big point of difference from other blockchains is that NEAR has been awarded a Climate Neutral Product label. This has been achieved by working with South Pole to reduce and offset carbon emissions. In light of criticism involving the energy consumption of Bitcoin and other blockchain projects, this is not just a good publicity move, but also makes business sense. The climate emergency is only going to get more urgent, and NEAR is now equipped to become the home for the growing number of environmentally-focused blockchain projects.

The native NEAR token, used to interact with all DeFi applications on the blockchain, has skyrocketed in the last year, going from $4 to its current price of $17.40. The price of the NEAR Protocol token reflects the belief people have in the project and its ecosystem. With a market cap $11.72 billion, it is now the 17th largest in terms of investment.

The site AwesomeNEAR gives us other up-to-date metrics, showing that new accounts, new contracts and the number of transactions are also rising. This demonstrates more users, and greater engagement with the increasing number of Dapps that are being built on the blockchain.

So what exactly makes NEAR a great blockchain to interact with. Here are some of the main features that make the protocol decentralized, secure, and fast, benefitting both developers and users.

As we talked about above, it’s not a matter of NEAR Protocol vs. Ethereum, but rather, how can these solutions work together to grow the blockchain sector as a whole. Rainbow Bridge facilitates this interoperability between layer one blockchains. Connecting to Ethereum, anyone can transfer ERC-20 tokens back and forth between Ethereum and NEAR.

According to the the website, sending funds to Ethereum can be done with 2 second finality and a typical cost of just $0.01 when using the NEAR protocol bridge.

In order to remedy the scalability issues that have been a feature of blockchains, NEAR has introduced its Nightshade sharding. In general terms, sharding involves splitting the data set of a blockchain between different individual or groups of nodes. This means that transactions can be finalized quicker and there are fewer points of failure, owing to the fact that nodes are only responsible for smaller chunks of data.

NEAR claims that Nightshade can scale linearly with the number of shards, therefore being able to satisfy the demands of billions of users. This is in contrast with Layer 2 scaling solutions that don’t incorporate sharding and would eventually hit a limit if enough users wanted to transact at the same time.

In regards to sharding phases, NEAR is currently on the second stage (Phase 1), with improvements set for Q3 and Q4 of 2022. The last stage (Phase 3) involves dynamic resharding, where the network splits and merges shards based on the most effective use of resources. This advanced sharding technique will help keep the network extremely fast and inexpensive no matter how many new users begin to use the blockchain.

One important milestone in blockchain that Igor Stadnyk, CEO of INC4, has written about before is the development of Ethereum Virtual Machines (EVMs) by the likes of Avalanche, Polkadot, Cosmos, and, of course, NEAR.

Aurora is an Ethereum Virtual Machine that allows developers to launch Ethereum compatible applications on NEAR. It also incorporates a cross-chain bridge so that developers can link their assets and smart contracts easily. Aurora’s base currency is ETH, so basically you can interact with Dapps as you would on Ethereum, without having to deal with the slow transaction speed and large fees, and taking advantage of NEAR’s throughput and scalability.

While not a technological feature, the passionate community, and especially guilds, play a large role in developing the NEAR ecosystem. NEAR Guilds are open communities of developers who assist the development of the protocol itself, as well as the applications built on top of it. With varied skill sets, guilds, of which INC4 is one, give NEAR an edge by helping to sustainably grow the ecosystem faster than other blockchain competitors.

Explore DeFi projects on NEAR

As we detailed above, there are currently over 230 Dapps on NEAR that have either been launched or are coming soon. Here we will look at four prominent and interesting applications, but you can also explore the full list here.

Ref Finance – a multi-purpose DeFi platform built atop NEAR Protocol. Integrating with many apps, Ref acts as one of the key gateways to the NEAR ecosystem through its automated market maker (AMM) DEX, which provides liquidity and exchange functionality. In addition, Ref uses the permissionless Rainbow Bridge, seamlessly connecting Ethereum-based assets to NEAR and vice versa. This allows DeFi users to enjoy the blockchain’s main advantages – low fees (less than $0.01) and high transaction speeds (1-2s).

Ref Finance’s native token (REF) is a governance token that also rewards its holders through a protocol revenue sharing model.

Ref Finance’s main product is currently a decentralized exchange that allows users to earn by farming in liquidity pools, which provide additional liquidity to the ecosystem. Using the opportunities provided by the Ref Finance aggregator, the user can earn REF and receive interest for farming.

Ref Finance has recently closed a strategic OTC sale with $4.8M raised. This was led by Jump Crypto, with participation from Alameda Research, Dragonfly Capital, and more.

The project roadmap points to the possibility of trading across several pools in one transaction, multi-wallet integration, Metamask user support, liquidity aggregation (NEAR x Aurora), and more.

Burrow — the first decentralized money market on NEAR Protocol Ecosystem, Burrow enables users to supply assets to earn interest, and borrow against them to unlock liquidity.

Given the use of the NEAR blockchain, Burrow will have “nearly zero transaction costs” and fast transaction closing times, which will solve two problems that many users have when trading on other blockchains.

One of Burrow’s unique features is to adjust collateral: you can customize the rate at which your assets are secured and adjust for each asset you lend. This is different from previous lending protocols, where collateral rates were set by default.

BRRR is Burrow’s native governance token. It will be distributed among users as a reward for providing assets. If users stake the native BRRR token, they will benefit from boosted rewards and will be able to vote on proposals to govern the DAO.

PembRock is the first leveraged yield farming platform on NEAR Protocol, which you can benefit from in the following ways:

PembRock Finance’s native token PEM will support the financial ecosystem of the platform, reward early adopters, and provide a governance tool for the community. Users can also stake PEM to receive xPEM – a governance token for DAO participation.

Even before the launch of the PembRock platform, respected members of the crypto community were already considering the project as a contribution to the future of DeFi:

In addition, PembRock is working closely on joint development with the aforementioned Ref Finance to support the protocol’s operation.

Keeping with its commitment to making blockchain space for truly innovative and forward-thinking projects, the NEAR foundation has recently teamed up with Sweatcoin, an application that mints cryptocurrency based on the number of steps a user takes. As the project is scaled it will track and reward SWEAT (the project’s token) based on other forms of activity, which can be spent within the app on goods linked to over 300 brand partners, including Reebok and Sonos.

As part of the NEAR ecosystem, Sweatcoin joins Open Forest Protocol (OFP), another social and environmentally conscious project which the INC4 Guild assisted in.

You can read more about OFP here.

A bright future for DeFi on NEAR Protocol

Launched about 2 years ago, the NEAR ecosystem is expanding at a breakneck pace and attracting new DeFi solutions, especially due to the $350 million that was recently raised.

NEAR provides developers with a range of modular components to help them fast-track their development and get their projects off the ground quickly. In addition, NEAR supports development teams with the help of the Near Guilds project and encourages them with grants, which serves as an additional incentive for deploying dApps on the blockchain. It is safe to say that NEAR is an ideal blockchain for the development of the DeFi ecosystem, an integral part of Web 3.0.

We at INC4 are extremely excited about the protocol’s capabilities for developing and deploying DeFi services, and are thrilled to be part of the Near Guild. By assisting the development of leveraged yield farming platform PembRock, our developers have another solid case to add to our dApps development experience. We can implement solutions of any complexity on NEAR or any other suitable blockchain quickly, reliably and professionally. Contact us for a free consultation.